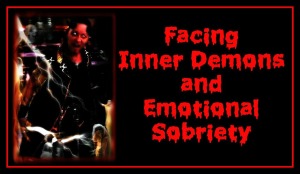 In the forty plus years of my life I have been through things that would drive most people to the brinks of insanity. I have been brutally attacked a total of four times, I’ve suffered the death of a parent as well as a child. I have been beaten and broken down. I have survived cancer and ridden the emotional roller coaster more times than I can count. I used to think I was a true survivor. I went through all of these traumas without the aid of a shrink, I didn’t talk to anyone about any of it and I didn’t allow myself to fade to black. It wasn’t until I got sober that I realized I didn’t survive anything. All I did was bury it all and my drinking and drugging helped me to keep it all buried.

There are almost always underlining reasons why an alcoholic drinks and an addict uses. Those are just a few of mine. My demons clung to my insides even though I kept my scars and my pain well hidden. The bottle helped me to create an alter reality. A reality I could deal with. Over the years, I became an expert in hiding my pain and my false reality became my true reality. The more I drank, the easier it became to live in my own little world. In the world that I created, I could not be hurt, I was well respected and loved. I was the center of attention at all times and I was strong. Of course the reality was I suffered from a great deal of self loathing, shame and guilt. I had little to no self respect nor did I have a sense of self worth. I pained me to look in the mirror on a daily basis and I had difficulty allowing people close to me out of lack of trust. People saw what I wanted them to see….no more, no less. In my world, I was always in control.

I drank and drugged for a total of twenty-eight years and the end result was I had no clue what was actually real and what wasn’t. My world was the only world I’d ever known. Sobriety scared me for many reasons. The main one being my method of coping was being taken away. Things that I had buried we coming to the surface, I had to face actual reality rather than the one I had created and there I stood with no idea who “I” was. I’d been living a lie for so long the person I’d buried was suddenly standing out there in the open feeling defenseless and terrified. Emotional sobriety scared me more than the physical sobriety (not drinking) On more than one occasion I struggled with facing the reality that I’d spent years running from or going back to the reality I had created because that’s what I’d always known. The problem was, the reality I’d created was killing me slowly but surely.

Emotional sobriety is much like a battle and an awakening. It’s a battle because we have no choice but to face the demons we’d spent all those years tucking away deep down inside and it’s an awakening because we are suddenly able to see life for what it is and not what we created it to be. This is the part of recovery that separates the men from the boys and the women from the girls. Our blinders are removed. This is where life as we knew it ends, and a “real” life begins. Physical sobriety just means not to drink….Emotional sobriety is about dealing with those demons and learning to live. For some of us, this task is too much and they go back to what they know out of fear. Fear is a dangerous thing to an alcoholic / addict. Fear keeps us sick. The fear of being vulnerable and actually having to deal with feelings of anger, shame, pain and disgust are just a few things we spend years trying to run from. The bottle and the drugs make it a whole lot easier to do that. Take away the bottle and the drugs, we’re left to face those demons head on.

When you face your demons head on, they know they can’t come at you that way any more, so they will come at you from all sides. Our disease doesn’t like it when we fight against it and will use any opportunity to reel us back in. By facing our demons and fears, we gain control of our lives. Not the kind of control we thought we had, but actual control. We are freed from that which we fear. I can’t speak for anyone else, but for “me” Emotional sobriety was the hardest thing to deal with. I was grown when I went into recovery, but in reality, deep down, I was still that small child I buried all those years ago. It was like I was being released from solitary confinement after 28 years. I was scared, unsure and very unstable. Here I am almost five years later, I’m still finding out who I am but I’m no longer afraid. I’m a work in progress one day at a time. Today I have the coping skills to deal with my feelings without having to dive into a bottle and for the first time in my entire life, I am truly at peace. I have my recovery program, my support system and a higher power to thank for that. My fear of tomorrow was greater than the pain I was feeling and that enabled me to find the strength I needed to face my demons.