An alcoholic (and an addict) are masters at making up excuses for their drinking and drugging and most of the time, we BELIEVE what we say to be fact.

* My girl or my man left me, so I got wasted

* I got fired so I got wasted.

* It was a gloomy day out, so I got wasted

The list can go on and on, but the truth of the matter is, all they are, are empty excuses. Most of the time they are used not to convince others but to convince ourselves. By excusing our bad behavior, we are justified……at least in our own twisted minds.

Reality check…..We drink and use because we WANT to. No matter how bad life seems to be, we don’t have to pick up. We pick up because we want to avoid situation we don’t want to deal with. No person, no situation can MAKE us pick up. We have a choice. If we chose to pick up, it’s nobody’s fault but our own.

In the 4 ½ years I’ve been sober, I’ve been to a total of 4 funerals, finally dealt with the death of my daughter and have gone through some extreme emotional shit storms. Fortunately for me, the thought of drinking never entered my mind. Could I have used those situations as an “Excuse” to drink? Most definitely Would it have solved or changed anything? Surely not. In fact, drinking would surely have made a bad situation worse. A temporary escape would have caused me to loose everything.

Coming to this realization is difficult for a newcomer. We are creatures of habit and always go with what we know. However comma….We can’t keep doing the same things and expecting a different outcome. Sooner or later we have to change our ways of thinking, our ways of doing things and our ways of life in general. 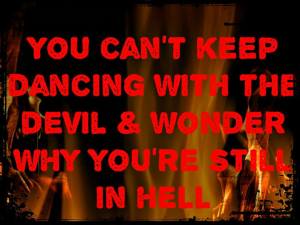 As we grow into our sober life, it gets easier, but we still have to put in the work and use the tools we’re given to stay sober and maintain our serenity. The next time you start feeling froggy, take a moment and THINK about it BEFORE you act on it. All alcoholics and addicts “think” about picking up from time to time, that’s normal. It’s when we put those thoughts into actions that we’re in trouble.

Using excuses and justifications for picking up isn’t fooling anyone but yourself. BEFORE you give in to the temptation and begin going through the long list of excuses in your brain, ask yourself and answer the following questions:

What will I benefit if I pick up?

What will picking up solve?

What will the consequences be if I pick up?

IF you’re honest with yourself, you won’t pick up. If you do pick up, it’s because you wanted to, NOT because of whatever excuse you chose to use. Living sober is a huge challenge for someone who has spent years living in denial, but it’s not impossible. Stop making excuses and face the facts. It’s always the best way to deal with any given situation. You are free to make any choice you wish, just remember choices come with consequences.