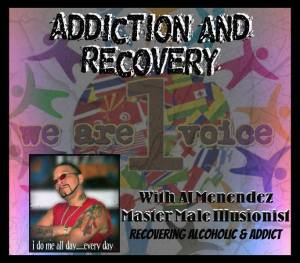 One of the first things I tell a new sponcee is that they must start a journal. I also talk about writing being very therapeutic on the Pit Stop Radio Show because it’s important to get things out of your head and once you put it down on paper, you can then begin to see it for what it is and deal with it…..When you’re an alcoholic or an addict, toying around with the thoughts that go through our heads can be a dangerous thing. It is for that reason, that this post is more of a personal one. I do my best to help others and try very hard to remain positive on a regular basis, but every now and then, even I crack because in my sobriety, I have discovered that I’m human.

Due to situations beyond my control I find myself going through the beginning of the “Grieving Process” When you go through a loss most of the time, it’s due to a death, but this is not the case. However, it’s still a loss. I’m not going to go into details, this post isn’t about that. It’s about how my sobriety has taught me to cope with extremely stressful stations without having to hit the bottle to make it all go away. I’ve recently found myself standing at a cross road and had to ask myself, do I want to maintain my serenity or do I want to be right? It’s no secret that I’m a fighter, but sometimes fighting causes everyone to loose. Choices were made on the other person’s part and then I had to make some choices of my own. I know in the long run, it was what is best for me, but I still have to go through the grieving process and deal with a significant loss none the less.

Do I want to drink over it? I will admit that the thought did in fact cross my mind. It’s a normal & automatic reaction for an alcoholic to want to “make it all go away” when they are feeling some kind of way. Dealing with actual feelings is something that we do not do well. In fact, if left up to us, we wouldn’t. Of course that’s how we got in our situations to begin with. Luckily for me, I’ve learned much in the past four years, and I know that it would solve absolutely nothing. The fact that the thought entered my mind was just further confirmation that as difficult as the decision was for me to make, it was in fact the right one. When you truly love someone, it’s difficult to stand by and watch things unfold, you see things that they do not and most of the time, you feel helpless. As a result, you start to feel a great deal of resentment and your insides get all kinds of twisted which was the biggest part of my own problem. There really is no right or wrong in this situation, it was more like a grave difference of opinion and in the long run, in my opinion anyway, everyone looses.

Some would argue that it is my pride and my ego that kept me fighting but I’ve come to realize that the truth of the matter is, it would have been my pride and my ego that wold have pushed me to keep fighting. Facing that reality was extremely difficult and was part of what caused me to let go. I honestly used to think that this tug of war I’ve been playing for the past few years was because I loved this individual so much. It wasn’t until this very moment that I realized the ultimate act of love would be to let go and stop fighting. For a great many years, I didn’t trust my feelings. There are times that I still don’t, but I have learned the difference between right and wrong, I have faith in my program, my sponsor and today I have faith in a Higher Power to help me make the right choices when I’m in doubt.

Does that make it any easier??? Ummmm, that would be a huge NO. A loss is still a loss no matter how you slice it. I still have to go through all five phases of the grieving process and unfortunately for me, I have to allow myself to “feel” every single bit of it. Which by the way, sucks big time. For those who are unaware of what those five phases are;

I’m definitely not in denial, so I think it’s safe to say I’m still in the anger phase although it’s not as bad as I guess it could be. I’m fully aware that given our long history, it’s gonna be a lengthy and trying trip for me, but it’s what is has to be. If I allow myself to get all kinds of twisted up, who knows where it would end up. At the end of the day, I have to do what is right for me. In spite of the situation, I truly do wish nothing but the best for this individual and hope his path leads him where he wants to be.